The #1 Reason I Put Coconut Oil in Coffee

A while back coconut oil in coffee was all the hype. I never jumped on the bandwagon back then or thought too much about it. Then we had a huge life shift…we had a baby! And you fellow mamas and parents know that when you have a baby everything changes! When I first found out I was … END_OF_DOCUMENT_TOKEN_TO_BE_REPLACED

A while back coconut oil in coffee was all the hype. I never jumped on the bandwagon back then or thought too much about it.

Then we had a huge life shift…we had a baby! And you fellow mamas and parents know that when you have a baby everything changes!

When I first found out I was pregnant I suddenly cared to an immense degree about what I put in my body. Now I was thinking of the baby I was carrying and it made me very aware of the kind of things I was ingesting. My big gulp wasn’t exactly the best thing for me anymore (I’m a recovering Diet Coke addict).

So, I began looking for healthier ways to eat and take care of my body. I was searching for remedies to help me with a number of aliments going on during pregnancy and after labor.

A common denominator in all my Google searches was the cures of coconut oil. From stretch marks and hormone imbalance, all the way to cradle cap. It sounded like a miracle oil and I was in serious need of a miracle.

Now that you’ve seen just a few things that coconut oil use can do for you. Let me tell you briefly why it’s so awesome.

The very short version is that Coconut Oil is high in fats called medium chain triglycerides(MCT). They are metabolized differently than most other fats because of their shorter chain length they can be rapidly broken down and absorbed by the body. They are responsible for a lot of the health benefits of coconut oil . (source)

All the benefits of coconut oil I mentioned are amazing! But, now for the real reason we are here…the #1 reason why I put coconut oil in coffee. I’m going to go through the list David Letterman style. Starting with the least important to most (in my opinion). Off we go…

The Top 5 Reasons I Put Coconut Oil in Coffee-

Because there is a high fat content in Coconut Oil drinking it in your coffee makes you feel fuller longer. This way you are more inclined to snack less which equals fewer calories in your body.

This on top of the metabolism gains listed in #2 reason can add up to a big difference for your weight goals.

The fat in coconut oil, MCT, are sent directly to the liver and do not get stored as fat. Instead they are turned directly into energy which will give you an extra boost on top of the caffeine that’s already in your coffee. (source) And let’s be honest I can use all the boost I can get! Especially in those early days when no one is getting sleep. Especially not mama!

Lauric Acid(the super healthy fats found in breastmilk) is one of the main fatty acids in coconut oil. This study found that it was gram positive and gram negative bacteria.

According to Web MD it is also used for treating, “viral infections including influenza (the flu); swine flu; avian flu; the common cold; fever blisters, cold sores, and genital herpes caused by herpes simplex virus (HSV); genital warts caused by human papillomavirus (HPV); and HIV/AIDS. It is also used for preventing the transmission of HIV from mothers to children.”

Coconut Oil is considered a “thermogenic” food. Meaning whenever you eat it your energy expenditure increases, burning more fat. Yay!! One study found that consuming 1-2 tablespoons of Coconut Oil a day would result in an extra 120 calories burned. (source) That’s not bad for sipping a cup of coffee!

And the real reason I put Coconut Oil in my coffee is that it helps me poop!! If you are like me you know that all the hormones that go on during and after labor can majorly affect your “digestion” (in attempts not to say poop again, oops). This subject can be a hard one (literally, ew gross, but true). I was in serious need of some natural remedies and I found it with coconut oil in my coffee.

Caffeine is a stimulant. Then when you add Coconut Oil, which is a natural laxative you get your digestive system moving. And that my friend, is a very good thing!

You can also forego the blender and add the coconut oil straight to your hot coffee and mix until it melts. 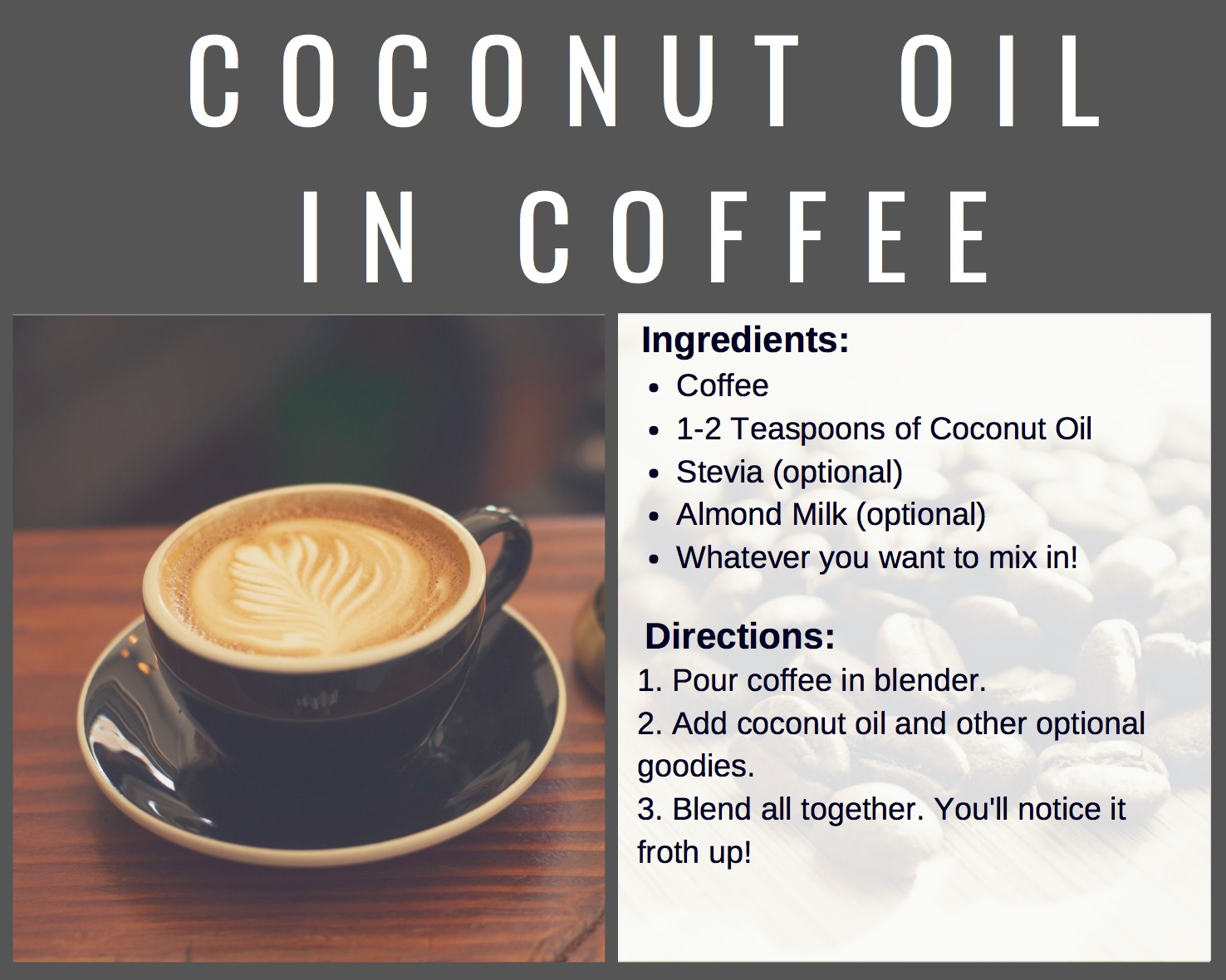 And I’ll leave you with this…

Isn’t everyone happier after they poop? And hopefully you are used to potty talk because for us moms it just becomes every day vernacular (laughing face emoji).

How to Use Coconut Oil for Dog Skin Problems

7 Ways to Use Coconut Oil in Your Beauty Routine

7 Reasons To Eat 2 Tbsp. of Coconut Oil Every Day

get 50% off coupon today

HURRY UP! Sign up to our newsletter today & get the coupon code.